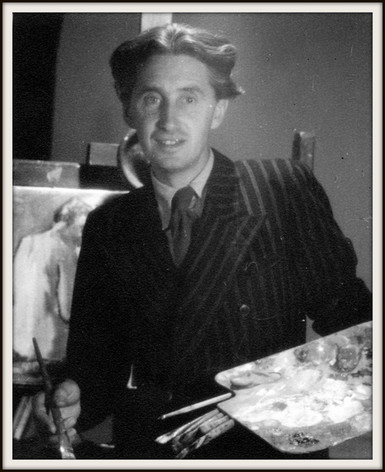 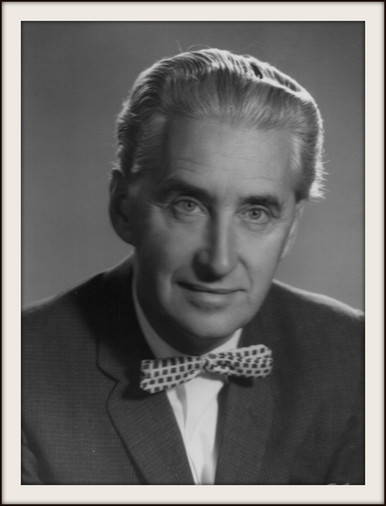 After World War 2, two notable artists arrived in South-West Africa - Otto Schroeder in 1947 and Fritz Krampe in 1951.Otto Edward Henry Schroeder was born in London in 1913. His father was German and his mother British. He spent his youth in the atmosphere of wartime London. As a German, his father was interned, and the youthful Schroeder and his mother were able to see him only when they were allowed to visit the internment camp. The absence of his father gave rise to a particularly close relationship between the youngster and his mother. After the war the family was repatriated to Germany, where they settled in Cologne. Whereas in England they had been considered Germans, the converse applied in Germany. In the intolerant atmosphere of the post-war years, this meant that young Schroeder was avoided by his schoolmates so that he had a lonely youth. This burden was aggravated by his general ill-health. He went to school in Cologne, and from this time took an interest in art. After he finished school, and at the insistence of his father, he enrolled at a school of commerce. In his spare time he studied art and psychology. After a year at the school of commerce, his father sent him on an extensive tour of Italy. It was on this journey that Schroeder finally resolved to become an artist. He nevertheless decided, again prompted by his father, to join the staff of a well-known export company and three years later he was employed permanently. He devoted every available moment to his art. He attended evening classes at the studio of Oscar Boegel and was also tutored by the well known Hamburg portrait painter, Hermann Junker. Junker’s influence on Schroeder was of essential importance. He encouraged his pupil and knew how to stimulate his enthusiasm for his subject. 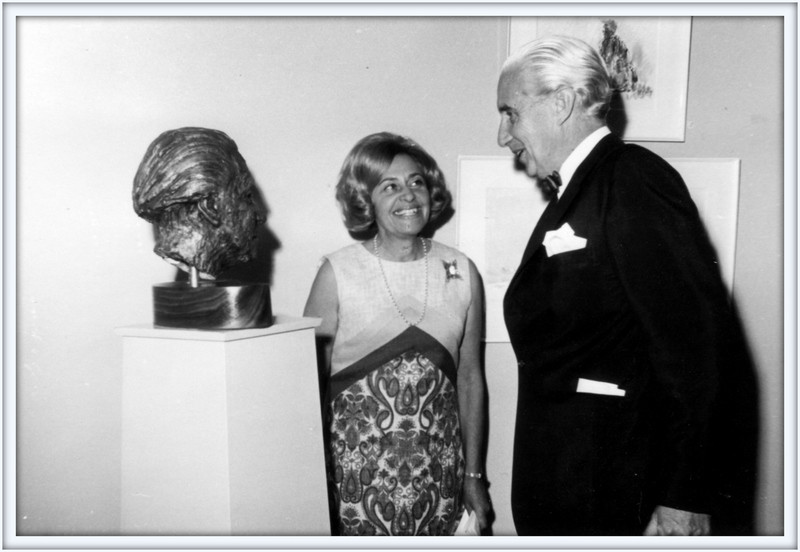 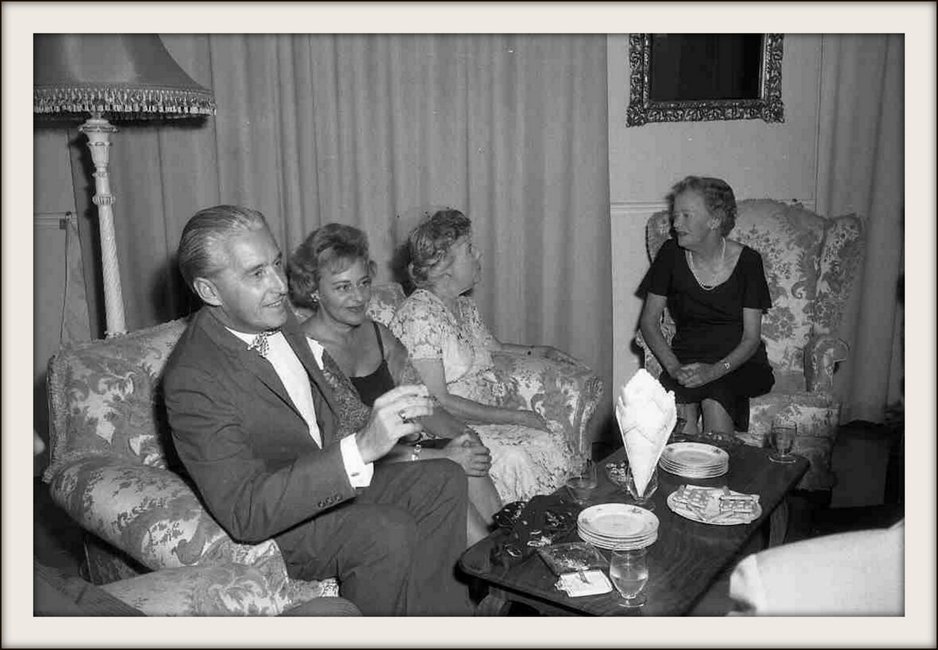 South West House. Cocktail party by the Administrator of South West Africa in honour of Master Adolph Jentsch. Handing over of the first prize awarded by the South African Academy for Science and Art in Pretoria - with Olga Levinson 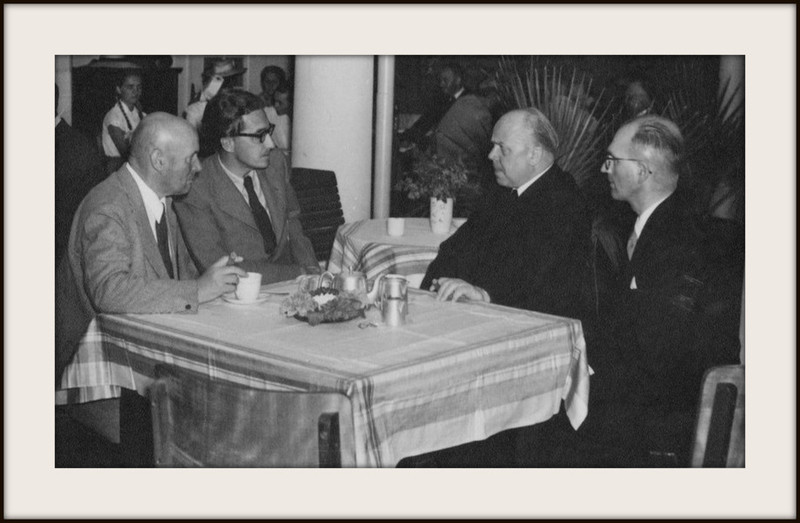 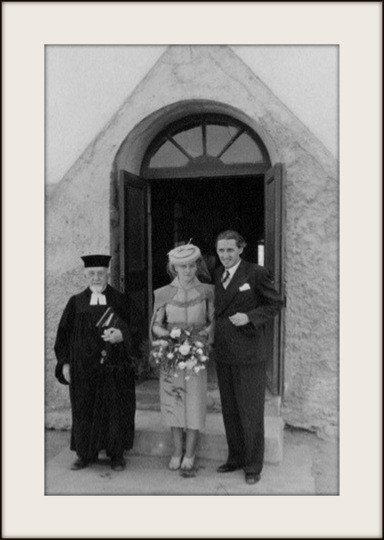 He nevertheless decided, again prompted by his father, to join the staff of a well-known export company and three years later he was employed permanently. He devoted every available moment to his art. He attended evening classes at the studio of Oscar Boegel and was also tutored by the well known Hamburg portrait painter, Hermann Junker. Junker’s influence on Schroeder was of essential importance. He encouraged his pupil and knew how to stimulate his enthusiasm for his subject. Schroeder himself declared that he was so inspired that he used to start painting early in the morning before work and hurried to Junker’s studio after work in the afternoon. When, in 1938, his employer sent him to Vienna to study optical instruments, he spent most of his time in art galleries. In March 1939, he arrived in Cape Town as a section manager of a German firm. When World War 2 broke out later that year, his service contract with the firm was terminated and he was left unemployed and penniless in a strange country. This, in a certain sense, was a blessing in disguise, as it enabled him to fulfill an old dream and devote himself full-time to his art. As he had a thorough command of English; he was able to establish contacts in Cape Town art circles and to tutor a group of private students in painting. 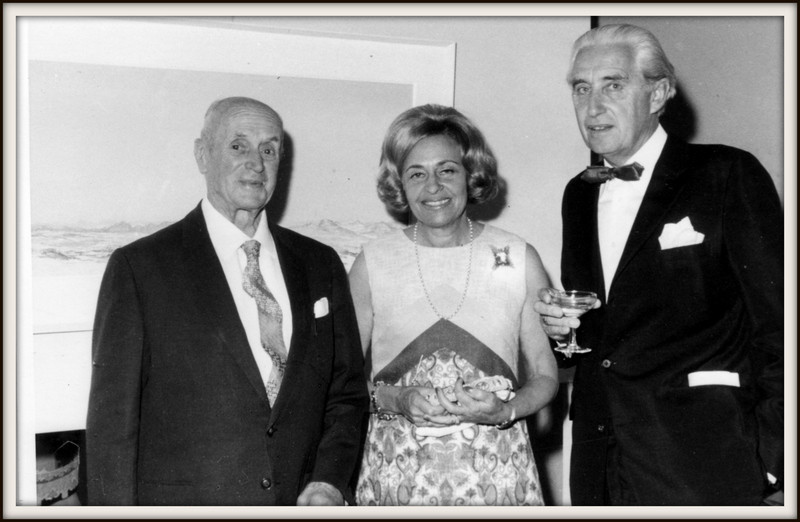 Otto Schröder published a small book about Adolf Jentsch, also a South West African painter and personal friend.  And in the “Afrikanischer Heimatkalender” his contribution about South African Art is substantial.

During this period he met the South African artist, Nerine Desmond. He also painted portraits of some of the members of the Cape Town philharmonic orchestra. In an article devoted to him in the March 1940 issue of the magazine Pictorial, his work was highly praised. The first exhibition of his work was presented at this time at Mathew Miller in Cape Town and critics predicted great things for the welcome newcomer. His ignorance of South African politics and his frankness about contentious matters, caused his students to leave him. Through the good offices of friends he left for Rouxville and later for Kroonstad in the Orange Free State where he again instructed a number of students. As was the case with the majority of German men at that time, Schroeder was also eventually arrested and interned in the Baviaanspoort camp near Pretoria. Nothing daunted, he instructed art students even in these surroundings, at the same time continuing with his art. He sketched his fellow internees simply, for practice, he said, as the features of all grew more or less alike after a few months in camp. Upon his release from the internment camp he decided to remain in South Africa. His mother had died during the war and their home and possessions in Hamburg had been destroyed. Thus all his ties with Germany had been broken. In 1947 he settled in Windhoek where, for many years, he was active on the artistic scene. 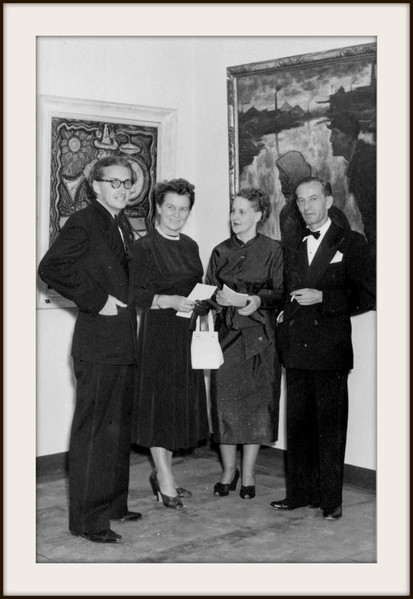 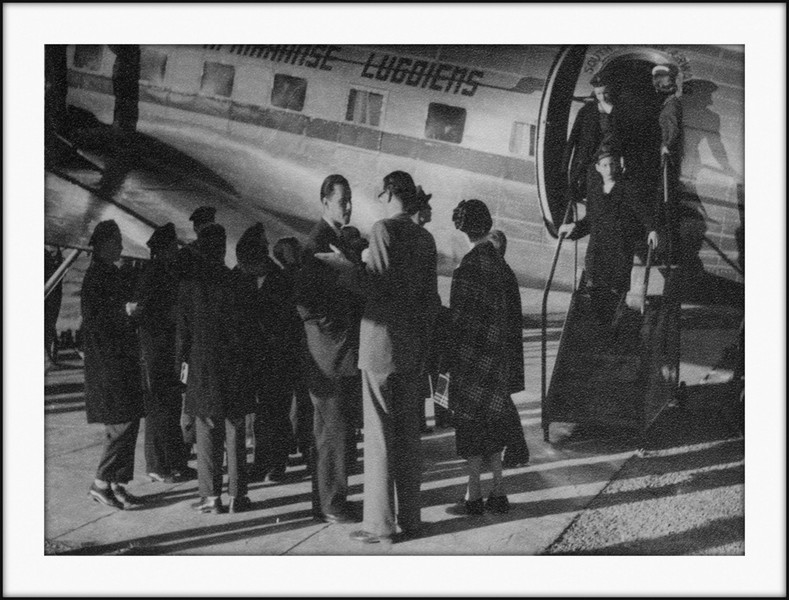 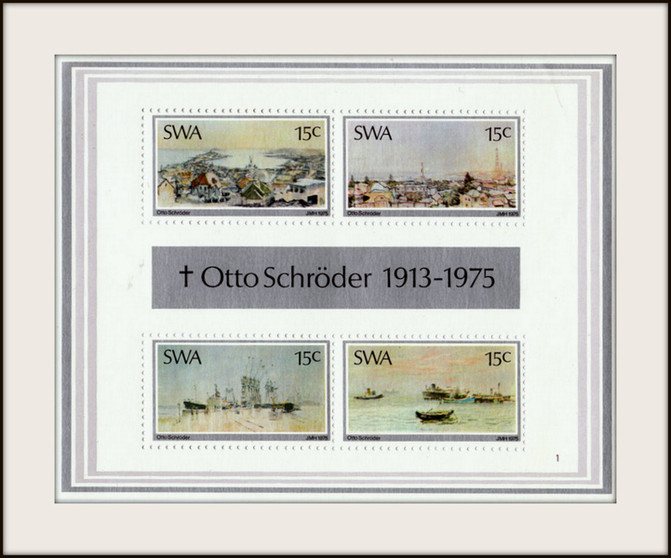 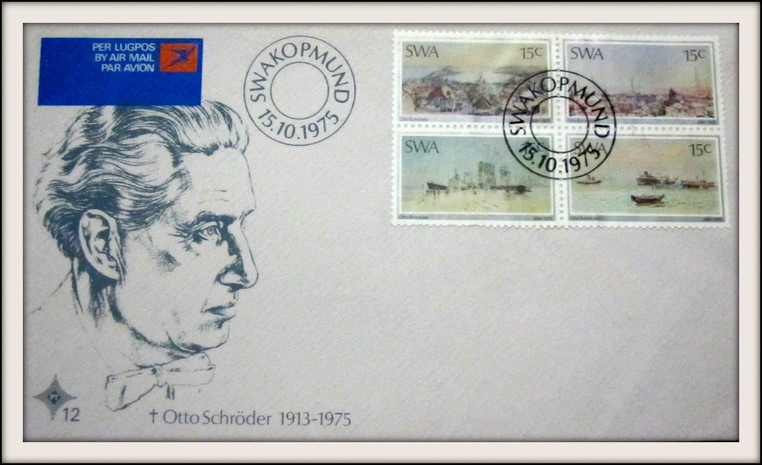 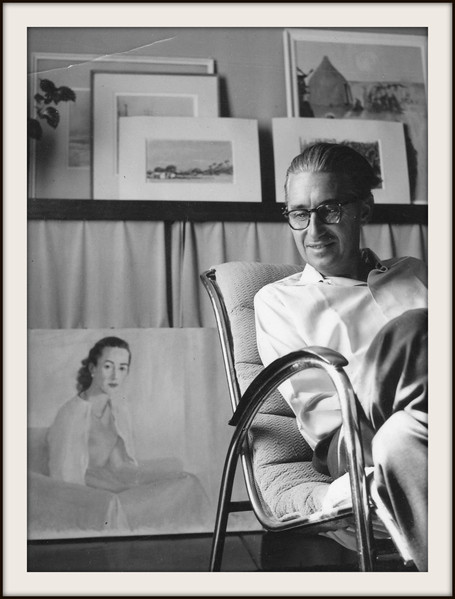 Otto Schröder at his Taal Strasse residence in Windhoek Namibia 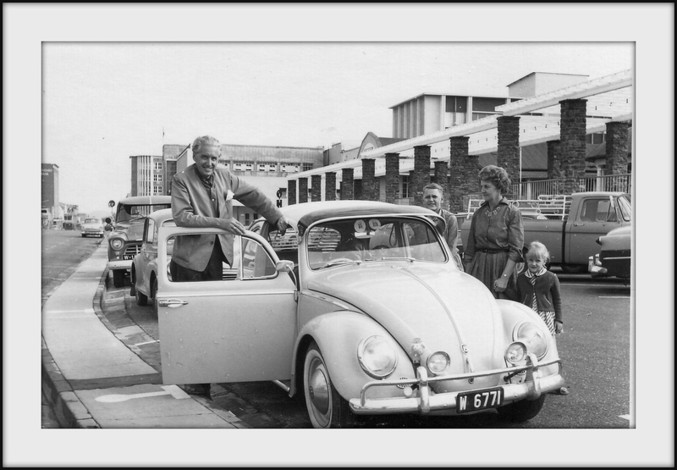 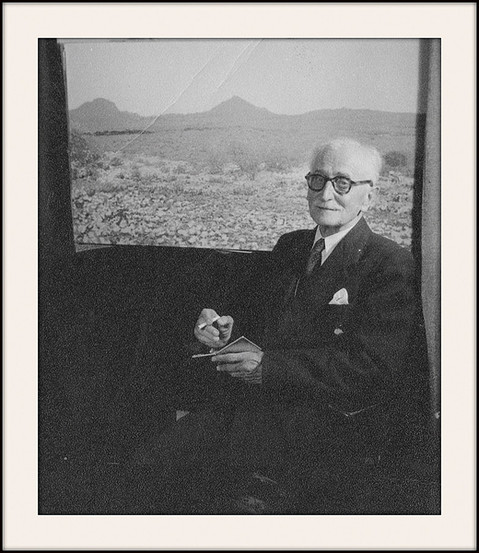 For this reason he was appointed a member of the selection committee of the Van Riebeeck Festival exhibition in Cape Town in 1952 and of the committee which had to decide on the South African entries for the Venice Biennale of 1956. In addition, he was a Fellow of the Royal Society of Arts, London, a member of the South African Council of Artists, of the International Society of Art Teachers (INSEA) Paris, and the Komitee vir Beeldende Kuns of the Suid-Afrikaanse Akademie vir Wetenskap en Kuns.

In 1962 he was appointed to the newly-formed Chair of Fine Arts at the University of Stellenbosch - a post in which he had distinguished himself until his death in 1975.Although his sacrifices for the sake of his colleagues and South-West Africa and his subsequent obligations as professor at a university interfered with his own artistic activity, he left an exceptional legacy.

As a portrait painter he holds a place of his own in South-West African art. His portrayal of the west coast, to which he returned year after year and where he had been working until shortly before his death, is known even beyond the borders of South-West Africa.